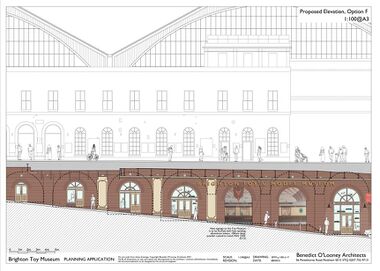 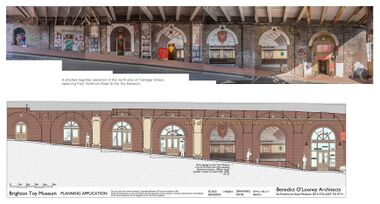 Collage of photos the existing site, and a projection of how the revised site might look [image info]

As of 2021 the museum has a regeneration plan proposal in review for the upper section of Trafalgar Street, from the entrance to the street extending under the bridge.

This section of listed brickwork and cellars was an important part of the Station's identity, and was built immediately after the 1841 station. It is believed to have been completed in 1841 or 1842: initially, Brighton's access to the station was via Trafalgar Street, with a one-way system operating at the top of the street. People wanting to go to the station would be taken by horse-drawn carriages up Trafalgar Street and would then turn hard right and climb the zig-zag Cab Road at the Eastern side of the station (which is now covered over as a tunnel).

When leaving the station, the cabs would exit through the station frontage and head back down Trafalgar Street (the upper part of the street being too steeply sloped for horses to take, uphill).

This interim measure was quickly replaced by the raising of the level of what is now Queen's Road, as the new preferred way of reaching the station, via a less punishing gradient. This required a narrow bridge to be built across the top of the street, using the brick cellars as a base on the Northern side. The bridge was then progressively widened Westward over the years, until this artificial level started to look like the local default ground level, making the upper part of Trafalgar Street more difficult to see.

At some point the gradient at the very upper section of Trafalgar Street was slightly reduced: legend has it that cast-iron chains from the old Chain Pier were laid into the resurfaced road structure to stabilise it and prevent the whole additional overlay section from sliding downhill.

Between World Wars One and Two, some of the arches were fitted with ornamental glass-panel fronts, to make the level's station entrance (with hairdresser and toilets) more attractive.

The set of arches on the North side of the Street is currently occupied by:

Although the museum has tried to improve the appearance of the area, with a Brighton Belle mural painted into the modern infills in three of the museum's four arches, and the council have added colour-cycling lighting to the opposite side of the street, the boarded-up arches higher up the street have created an impression of a derelect area, and these boardings initially attracted graffiti, which then quickly spread to the listed brickwork between them and all around, making the whole area (including the museum's front) a continual target for tagging.

As a result, what should be the default pedestrian tourist gateway to the shops of North Laine for people arriving in Brighton by train, is currently a slightly abandoned-looking and forbidding tunnel.

The suggested remedy is to refit all arches (except a pair of the current "Brighton Belle mural" arches) with ornamental framed glasswork, to recreate the look and feel of the area during the interwar years, when the station entrance arch was active and the arch alongside was a hairdresser's. It is envisioned that two of the Museum arches will be replaced with framed glass, and the remainder of the arches either with functional framed glass, or with "dummy" framed glasswork to match, with the station access arch designed initially as a "dummy" but with the option of conversion if it is ever reopened.

With every arch occupied either by artwork or ornamental glasswork, the "boarded up" look of the Trafalgar Road bridge brickwork will be replaced by a local feature and an asset to Brighton's tourism industry, creating an inviting introduction to the city via the North Laine.

This project sets out to do two things. The catalyst for the project is to make more visible and welcoming the Brighton Toy and Model Museum by creating glazed shopfronts to the entrance and two of their other five arches. The second aspiration is to brighten and improve this stretch of Trafalgar Street, an important thoroughfare for Brighton which begins under the forecourt deck of Brighton Station.

In the 1930s, the Southern Railway developed shops and a station entrance in the Trafalgar Street arches. These were closed up in the post-war period. We think that Trafalgar Street would be improved by re-creating the shopfronts here, improving the commercial potential of the spaces behind. The public’s experience would be a brighter, more visually interesting space with active frontages and natural surveillance.

The Toy Museum welcomes opening up several of their arches to improve their visibility and show some of their remarkable collection. Their workshop arch could be made more visible too. This fabric of the Grade II listed Brighton Station is improved by reintroducing shopfronts on Trafalgar Street inspired by their original inter-war design.

This project could be delivered in phases, beginning with the Toy Museum arches. We think it would be good to apply to Brighton & Hove Council for Listed Building permission for the wider vision for the Trafalgar Street elevation, not just the five Toy and Model Museum arches.