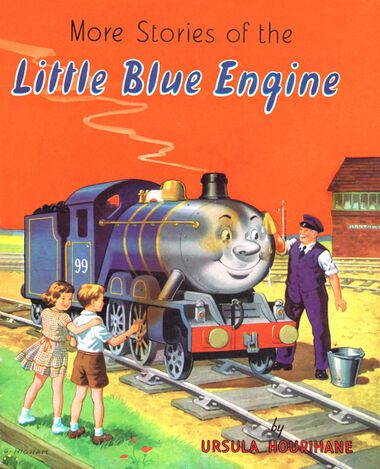 Front cover of "More Stories of the Little Blue Engine", circa ~1955 [image info]

The "The Little Blue Engine" series of books were written by Ursula Hourihane, illustrated by Geoffrey Higham, and published by Juvenile Productions Ltd., shortly after World War Two.

This made them a contemporary of the early Thomas the Tank Engine books, which also followed the adventures of a small blue locomotive with a face.

Both engines had grey faces, but where Thomas' was based on a distinctive disc (the locomotive's front maintenance hatch), Sammy's grey face was smoothed around the sides of the loco's front.

Geoffrey Higham's playful and deep-coloured illustrations are normally remembered for his work on a range of Enid Blyton books, most notably the Noddy series.

It's difficult to find any date material on the copies of the Little Blue Engine books in our resource room, so these tentative dates are based on online information: