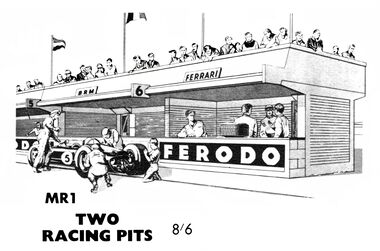 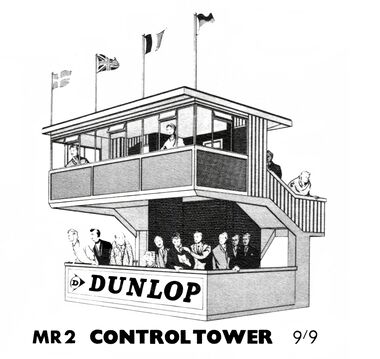 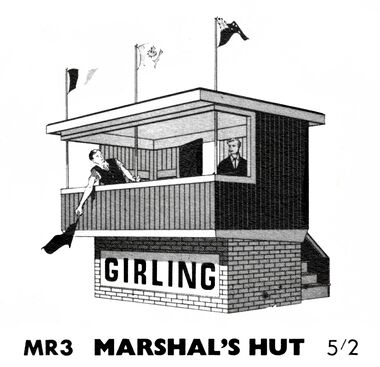 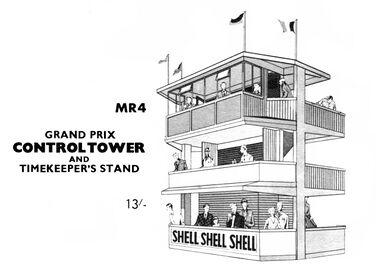 The Superquick Motor Racing Series ("Superquick MR Series") was a handful of 1:32-scale card model building kits of car racetrack buildings added to the Superquick range in the 1960s, intended as roadside accessories for 1:32-scale slotcar systems such as Scalextric.

This "niche" offshoot of the main Superquick range didn't last all that long, perhaps because it appeared as the peak days of slotcar racing were already waning, and perhaps because slotcar owners were not usually so interested in adding trackside buildings to their layouts, which could obstruct views, and get "bashed" when cars span off the track. While 00-gauge model railways (with their small 1:76 scale, narrow track and gaps between sleepers) really demanded a hard surface, preferably a tabletop so that it could be seen easily, and didn't respond well to carpet fluff, encouraging owners to build permanent or semi-permanent layouts in bedrooms, slotcar track systems with their far wider roadways and sealed bases were more stable and made it more tempting to throw the track together on the living room when family members wanted to race against each other. If one was enthusiastically plugging track sections together in anticipation of a race, one tended to be less minded to waste time setting up roadside buildings.

Since "carpet" layouts tended to be less restricted by space and more "ad-hoc", if more money was to be spent on improving a set, it tended to be spent on adding more track rather than on nonfunctional pieces like buildings, and if someone was buying buildings, they might be more confident in plastic buildings that had more textured detail and that felt more robust, and more likely to survive periodically being thrown into a storage box and having a load of track dumped on top of it.

A page from the KeilKraft Handbook for circa ~1969 show a range of four models, MR1 to MR4, and mentions an un-numbered "Dunlop Footbridge" kit as "Available Shortly", although we're not sure if this fifth item ever actually went on sale.