George Lucas had not been long out of film school when he made Star Wars (1977).

The film was not widely anticipated to be a success. After his student short films, Lucas had made one sci-fi film, THX 1138, with a slightly uninspired "shiny white dsytopia" theme that seemed more or less lifted from Logan's Run, but had then gone on to direct and co-write American Graffiti (1973) , an American coming-of-age movie set in 1962. "Graffiti" was a success (arguably the inspiration behind the 1974 TV series Happy Days), and gave Lucas enough clout in the industry to be able to make his big sci-fi movie.

The film appeared with almost no pre-publicity, and when the first audience arrived for the premiere at the Empire cinema Leicester Square, London, many of them had no real idea of what it was they were about to see. 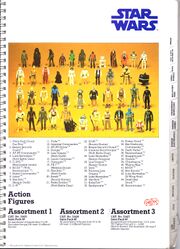 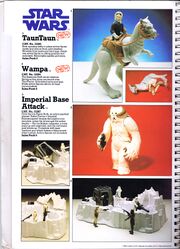 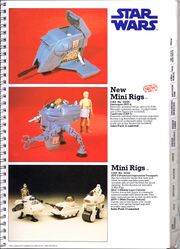 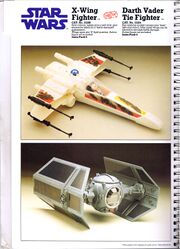 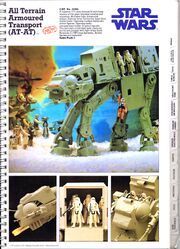 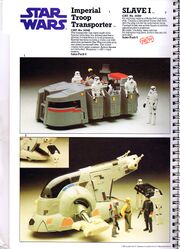 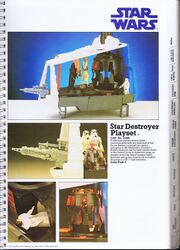 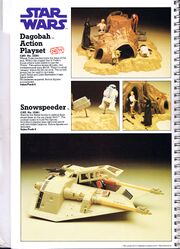 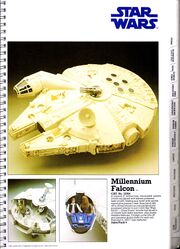 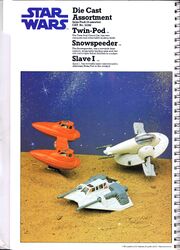 The Art of Star Wars

Star Wars was a collage of film and media references, and set-piece scene references. The film was openly inspired by the old "Flash Gordon" serials, whose episodic format took a character between different worlds and adventures. The strongly-"scened" format allowed the viewer to ride a rollercoaster of visual imagery with minimal repetition, which meant that, if the visuals were strong enough, dialogue could be kept to a minimum. The film also drew on a stack of film school references, from the desert shots of Tattootine echoing Lawrence of Arabia, to Kurosawa, and The Dambusters.

However, where Star Wars really scored was in its visuals. Lucas' visually-oriented film-making style, coupled with a big investment in original quality production design, meant that the film introduced realistic-looking worlds where not only was the technology alien-looking, but looked used, and along with Blade Runner (1982), Star Wars helped change the look of the science fiction film. Where Thunderbirds and Kubrick's 2001 had embraced industrial design, and Silent Running (1972) and Alien (1979) accepted the idea that future industrial design didn't have to look factory-fresh, in SW/BR, machines were often downright filthy (the classic example being the BR videophone, where a previous user has traced someone's image on the screen in pen).

Robots had scratches and dents and missing parts, spaceships were patched-together and badly weathered, and futuristic devices oozed grease from their joints. With pre-production artwork by NASA artist Ralph MacQuarrie and a massive art team carefully sourcing or designing everything from pipes to wall-panels, Star Wars was a visual onslaught from the opening "perpective" credits (possibly inspired by the "road" credits in "Kiss Me Deadly", 1955) to the final scenes. The film looked incredible.

Star Wars was converted into a trilogy by the release of The Empire Strikes Back and Return of the Jedi, which reprised the first film's approach to ethics, gender roles and and a cultural naivete that could most politely be described as "naive" (for instance, it was an "odd" universe in which women didn't seem to exist apart from princesses, slave girls and murder victims), but introduced new worlds and corresponding design themes for the associated architecture and vehicles, such as the cloud city of Bespin (arguably a steal from French artist Moebius), and sandworms (apparently unashamedly filched from "Dune").

Lucas took more of a controlling hand for the next three films, a prequel trilogy set before the events of the first Star Wars film (now retitled Star Wars Episode IV: A New Hope).

The three prequel films were made in fairly quick succession, and were notable for their frankly awful story arcs, character and plot inconsistencies (when Anakin "makes good" by joining the Jedi, it doesn't seem to occur to him that buying his mother's freedom might be a nice thing to do - a convenient murder means that her character doesn't need to be developed, either), even stronger and potentially offensive ethnic and sexual stereotyping, and for their truly, truly abysmal dialogue. Where "period" attitudes to stereotyping might have represented a form of authenticity in the Raiders of the Lost Ark series, or used affectionately in a period nostalgia pieces like Graffiti, early Western C20th cultural stereotypes were less forgiveable in a series of films supposedly set a long time ago in a galaxy far, far away - it was difficult to justify a money-lending alien with a big nose who was apparently wearing a Jewish pork-pie hat and talking with a Jewish accent, or a race of thick-lipped lazy aliens who sounded suspiciously as if they came from Jamaica. While Lucas defended the decision to draw on stock ethnic stereotypes as a traditional storytelling tool, fans considered them to be lazy writing, poor characterisation, ethically iffy, and (if one wasn't consciously making a "retro" film) simply bad film-making. With the first trilogy, the original fans began to wonder whether Lucas' focus on period genre films might have been because he simply couldn't write convincing gimmick-free human characters.

However, less analytical small children introduced to the series by the prequel trilogy loved the films.

Star Wars became a toy-marketing behemoth that clocked up with billions of dollars worth of international sales.

In order to develop their own visual vocabulary, the fifty-strong art department for the original film plundered the patent archives looking for machines and mechanisms that were either never developed or which never became popular, and this gave the hardware in the films a distinctive and identifiable character and "look" that lent itself well to toymaking exploitation.

One of the unspoken design rules of the Star Wars universe is that, ignoring an occasional lapse, the societies depicted appear not to have invented the wheel. Vehicles hover or fly, but their landing gear terminates in sleds rather than wheels, and while caterpillar tracks are allowed, conventional simple wheeled vehicles (usually) aren't. Large land transport vehicles tend instead to move on jointed legs.

In a miscalculation of the likely worth of the merchandising for the film, studio bosses at 20th Century Fox allowed Lucas to negotiate keeping the entire merchandising rights for the film (and the ensuing franchise). The film studio execs were not the only people to underestimate the film. Composer John Williams produced a fine stirring soundtrack for the film, but because he expected the film to sink without trace, he didn't bother writing his own themes for the film, and simply lifted the themes from Gustav Holst's "Planets" suite. Williams was then left in the annoying position of being best remembered for a piece of music that was essentially an "arrangement" rather than for an original masterwork of his own.

The classic spaceship toys from Star Wars were the X-wing fighter, a long fuselage with a cockpit and two wings that split apart into an X shape when outside the atmosphere for extra manoeuvrability and targeting accuracy, the TIE Fighters, a series of odd eyeball-shaped craft with an octagonal paned forward window and solar panels on struts, and the Millennium Falcon, a battered asymmetrical freight-carrying spaceship. The number of spaceship and vehicle designs and variations steadily increased as more films were released.

Over the next few years, other film-makers attempted to cash on on the resurgence in interest in science fiction due to Close Encounters of the Third Kind (1977) and Star Wars, but the Star Wars-inspired fighter craft in Battlestar Galactica and other "bandwagon" films looked cheap and derivative against the Star Wars originals, and had nothing like the same impact on the toy market.
Toys and models of small "fighter" spaceships proliferated, with even Meccano producing a kit.

Part of the Star Wars toy phenomenon was the "Action Figure", a painted plastic jointed figure to the same scale as some of the spaceship toys. Where most films might have a limited range of main characters to model, Star Wars had distinctive aliens and robots, and some of the characters might undergo major costume changes between scenes depending on whether they were trying to survive in an arid desert or on an ice planet, or were in uniform flying a spaceship. This generated a wide range of distinctively different (and very collectable) figure, made by Kenner in the US, Palitoy in the UK, and the French Meccano company in France. 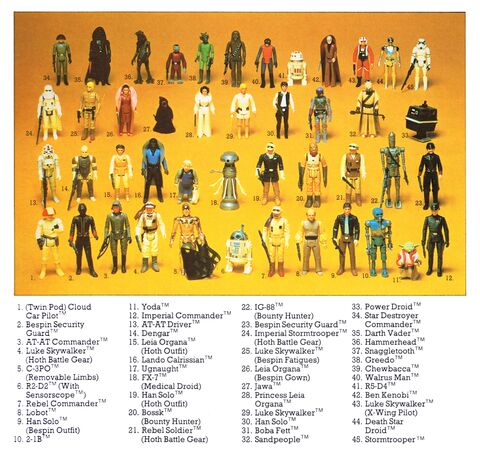 The 1982 range of action figures, Palitoy

Minor variations even for a single model made some of the short-lived versions extremely desirable to collectors, and the fact that the figures were sold in attractive card-backed bubble-packs that were destroyed when the figure was removed makes unopened examples of some of the rarer pieces even more sought-after.

One of the main Star Wars ranges that has persisted is the array of Star Wars sets made by Lego. Getting the Star Wars franchise is regarded as having been one of the most important events in Lego's history, and although it involved breaking their implicit "no military vehicles, no guns" rule, and disappointed many parents who had liked Lego's previous non-militaristic stance, it wasn't credible to produce models of fighter spaceships and other attack craft, and pretend that the purpose of the vehicles was to allow the characters to go off and have a nice happy picnic. However, the range is reckoned to have made Lego a lot of money, and the Lego Star Wars sets are still selling well more than thirty years after the original film was released.

Since the museum's display spaces focus on toys and models produced up until the 1950s (or in a few cases, the 1960s), Star Wars (1977-) is outside our range. We do usually have some of the older older Star Wars toys on sale in the museum shop in the foyer thanks to our Collectors' Market, but nothing in the ticketed areas.

As a point of deeply obscure trivia, the 1950's lead-cast Princess Tai Lu Siamese cat character in the lead "film and movie tieins" cabinet was invented by one Shelagh Fraser for a children's book that she wrote ... and Shelagh Fraser went on to a career in acting, and many years later played Aunt Beru in Star Wars!