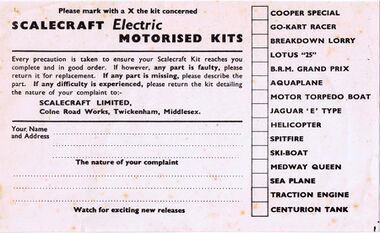 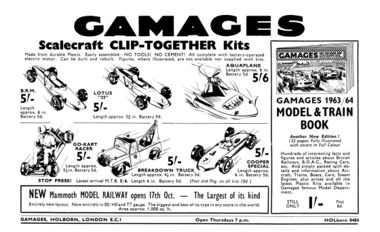 Scalecraft Limited of Twickenham produced a range of motorised snap-together plastic kit vehicles. The range included a number fo racing cars and a go-kart (refelecting the popular interest in motor racing in the Sixties), and then a set of disparate examples of one of each of a bit of everythign else that might be motorisable: a breakdoen lorry, a few boats, three quite diferent tpyes of aeroplane (including a Spitfire), a helipcopter, a traction engine, and a tank.

The kits were advertised as "Made in England" / "Motor Empire Made", which in this case, meant that the motors came from Hong Kong, manufactured by Kim Toys (whose logo was designed to look like a cross-section through an electric motor). The examples we've seen so far just used a single AA-sized 1.5V battery.

" Scalecraft CLIP-TOGETHER Kits'
Made from durable Plastic. Easily assembled – NO TOOLS! NO CEMENT! All complete with battery-operated electric motor. Can be built and rebuilt. Figures, where illustrated, are not available nor supplied with kits. "

Paperwork supplied with the "Electric Skiboat" kit that we have in the museum lists the range as being:

, so presumably these two appeared a little later.

The exact names of the models varied across listings, depending on how much space the names had to fit into (in some places, the Cessna 180 might just be listed as "Seaplane"), so the above list of names are partly canonical, and partly expanded from information given in Scalecraft's descriptions. We dont know if there might be further, later models not listed above ... but since the range already seems reasonably thorough, there might not be.