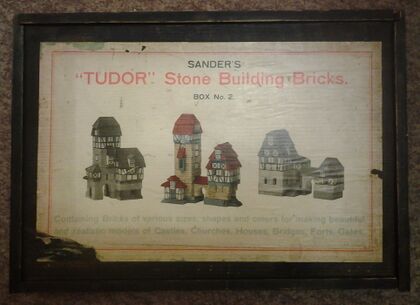 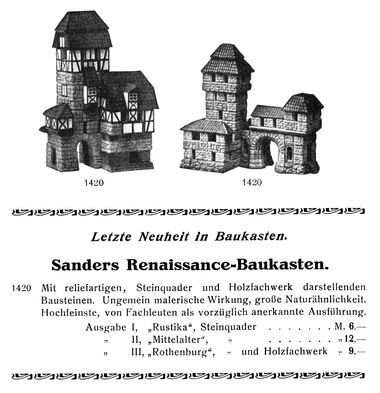 The Box No.2, Sander's Tudor Stone Building Bricks in the museum's collection, and the company that made it, are both currently something of a mystery. There doesn't seem to be any information about a toymaker called "Sander's" in the standard literature or on the internet (other than a brief mention that these bricks exist).

The set is unusual in a few ways:

With these things in mind, we think that these sets may have been produced specially as promotional items.

While we were looking for a "Sander's" toymaking company, our research has turned up a parallel story: in the 1920s a property developer called Alf Sanders built a series of similarly fairytale-like "mock Tudor" houses for real, in the Hampton Hills estate, Oakcliff District, Dallas, Texas USA, and promoted them heavily. We originally thought that these toy block sets might have been commissioned by Sanders as a way of promoting his houses (or simply because he was a fan of Tudor buildings in general).

However, we've since found adverts for the sets in German in a German toy catalogue, and been contacted by a collector telling us that the sets were German, and that there's a German identification on the lower left corner of the box sticker that, on our example, has been torn off. This raises the possibility that our attempts at identification might have been hampered by the deliberate removal of the sticker corner, if a previous (British?) owner was not happy with continually being being reminded that their playset was German-produced.

Tobias Hötzer of Austria writes to tell us:

" These sets were manufactured by Franz Sanders in Köln-Sürth, Germany from 1911-1913. The sets were sold under the name "Sander's Renaissance-Steinbaukasten" in German-speaking countries. "

Armed with this additional information, we've been able to find other examples of sets online, with German documentation, marked DRGM , for Deutsches Reichsgebrauchsmuster, meaning that it was a German-registered design (registered some time between between 1891 and 1952).