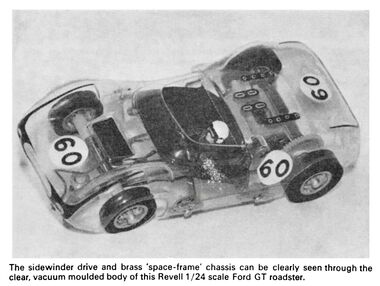 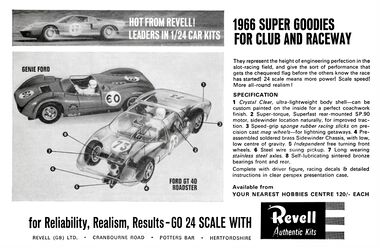 Revell's ready-to-run systems in the US were influenced by the existence of commercial US slotcar racing venues that used the larger 1:24 scale, and Revell produced track that could run cars in both formats: the gap between the slots was wide enough for even the wider cars to pass each other, and one could clip straight and inside and outside "track width" extensions all the way around a 1/32 layout to make it more suitable for the larger 1/24. The extensions also had edge fencing, which meant that they could also be justified as add-ons for part or all of the layout, even if the user was only running 1/32 cars.

The other obvious innovation of the Revell system was that instead of supplying support for bridges and crossovers in different sizes, they had squat cylindrical clip-together blocks that stacked to allow the user to decide what height of pillar they wanted.

AT LAST! You can be a Champion Racer in your own home with the new "Performance-Proved" GRAN TURISMO MODEL CAR RACING SET

Sooner or later it had to happen!

Experienced Revell racers knew that Revell had to introduce its own complete racing set ... but the BIG question was WHEN? Time and time again, Revell could have brought out a makeshift substitute but Revell Quality has always stood for the best and that's what Revell set out to make – the BEST!

A standard Revell track was in continuous operation for 250 actual miles of car travel! A complete survey reported "no deterioration of track surface or electrical connections". Revell's track is trouble-free.

Revell track has positive interlocking without separate locking devices. It has a pre-wired terminal section, operating with a simple plug-and-socket connection. Nickelplated steel electrical conductors in channel form insure non-oxidizing surfaces, wear-resistant surfaces and non-buckling surfaces! Revell track is made of high-impact plastic that can be flexed without disengaging at interlock, providing positive mechanical and electrical alignment!

Each Gran Turismo set has a power pack that delivers a full 1500 Milliamp rating ... with over 2000 Milli-amps available for intermittent operation. Power cable is pre-attached to pack, with pre-wired plug for instant connection to terminal track.

Completely-assembled, authentically-detailed models of the 1964 Corvette Sting Ray Fastback and the Ferrari 250 GTO come with each set. In independent tests, these two Revell racers completed a fantastic non-stop run of 101,400 standard laps ... with no breakdowns, no mechanical failures, no component changes!

Two controllers with each set. Each controller, with case specially engineered to fit the hand, is ready for operation in seconds. No tedious wiring, no exposed electrical connections ... just a simple plug-in socket and the controllers are fully connected to the terminal track. Full Stroke Rheostat operation with built-in braking action.

The realism and excitement of Gran Turismo racing is given added impetus with a Spin-out Apron and Fence at each curve of the track. The fence is actually molded to the outside of the apron providing reliability and ease of assembly.

With maximum performance and foolproof durability, Revell's Gran Turismo Racing Set is simplicity itself: no wiring, no gluing, no "track-holders" to insert ... just SNAP TRACK TOGETHER ... INSERT PLUGS IN SOCKETS ... AND RACE!

See these fantastic new racing sets from Revell at your neighborhood racing center, your local hobby shop or wherever model car racing sets are sold. The Gran Turismo set, complete, sells for $40.00, a real value. You probably don't have that much in your piggy bank right now so do a few extra chores after school for the next few weeks and save up for this quality, precisely engineered racing set from Revell. (Or, slip a note to Mother and Dad and tell them to think about this for Christmas. They'll enjoy racing with you!)

NO NERFING IN THE ESSES!

And if you know what that means, you already know that Revell has the winningest and most realistic model racing cars you've ever seen ... cars in 1/32 scale and in 1/25 scale that you can race right on your own track.

It's more fun to build up with Revell

The Revell raceway system has an interchangeable everything

Build the simplest two lane or most elaborate four lane layouts. Change them when you've mastered the road course and want something more challenging. Add chicanes, lane changers, and other track features. And race the biggest 1/24 scale cars on your Revell home layout by adding new shoulders and inside apron sections.. Here's a complete engineered system of interchangeable parts – track, cars, controllers, power pack, modular piers and accessories – that makes possible construction of any kind of layout.

Revell home Racing Set 1/32 scale cars have been perfected in hundreds of thousands of commercial raceway miles. Their detailing is authentic, and the components are of the finest quality ... rugged, fast motors, lightweight aluminium chassis, metal axles and gears and real rubber tyres.

These preassembled Revell cars are the fastest cars that come as standard equipment with any racing set.

Revell also manufactures a complete line of model car kits for commercial raceway use that you can use on your Revell Home Raceway.

Race the same big 1/24 GTOs you race at the commercial raceways on the Revell Home Raceway Set. Just add these special sections to make the roadbed wider, to accommodate the larger wheelbase of the 1/24 cars. These special apron pieces make 1/32 scale more exciting and realistic too.

groovy – Get the kicks of racing this Christmas with Revell

There you are screaming down the track, slamming into a curve, calling on all your skill to power past the competition ... getting all the kicks of the real thing with a Revell Home Race set!

A powerful power pack that lets you really pour it on! Plus interchangeable parts (chicanes, crossovers, curves, straightaways), so you can build a setup as intricate as you want. And Revell is built to take it, for year after year of excitement.