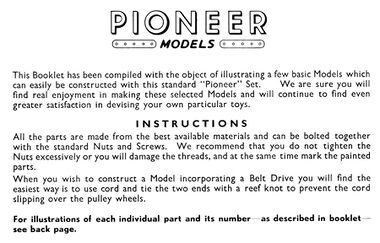 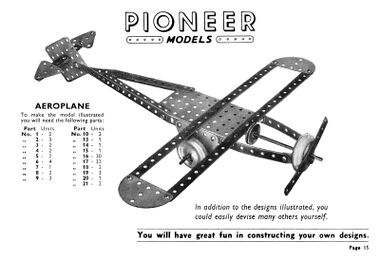 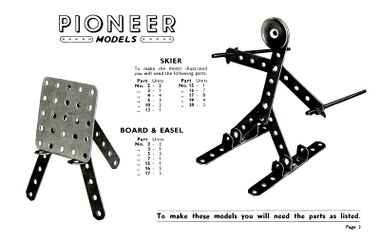 Skier, and Board and Easel [image info]

The Pioneer Models metal construction sets seems to have been produced without an obvious company name or address, but were suspiciously similar to the "Meccano clone" sets made by Vogue Playthings Ltd., with the same red and green parts, the same octagonal strip ends, and the same parts list, distinctive "spandriver" combined screwdriver and spanner, and parts diagram. About the only difference (apart from the different name and shorter manual) being that the "Vogue" sets had bright red metal wheels, while the Pioneer set that we know of has bright red plastic wheels (of the same basic shape). 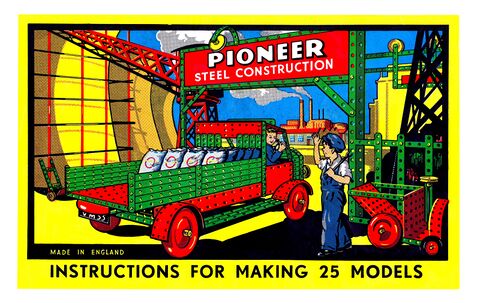 Although the cover art for the Pioneer and Vogue boxes showed different scenes, they were stylistically indistinguishable, and seemed to have been executed by the same artist.

The Pioneer manual that we have has no company name or address, and is shorter then the Vogue version, but has the same style of artwork, abbreviated versions of the same topics (such as the advice on using string for drivebands), and the same basic tone, and feels as if it was written by the same author.

A further clue is that the Pioneer Models manual shows a lorry with numberplate VM55 – we're guessing that the "V" might stand for Vogue, and the "55" might represent the year 1955. 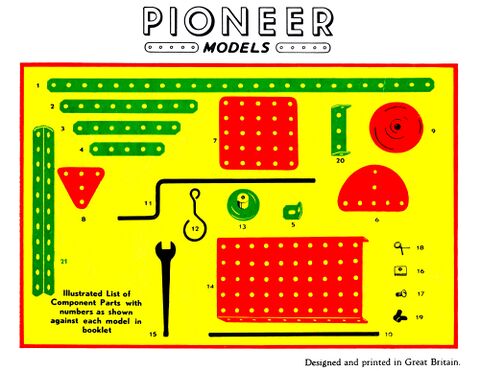 Diagram of parts, from the Pioneer booklet. As well as the stylistic similarities of the page design, the set is a subset of the Vogue parts list sheet, complete with "Spandriver"

We don't currently know the exact relationship between these two brands. It may be that that Pioneer was an anonymous attempt to sell cheaper kits to the overseas market or to alternative retail channels in the UK (like Woolworths) without using the Vogue branding (much like the way that Meccano Ltd. sold cheaper versions of Meccano X Series kits under a different brandname ("British Model Builder") with anonymised packaging stripped of obvious identifiable maker marks.