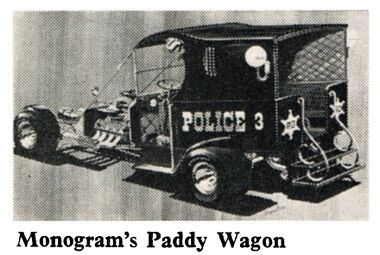 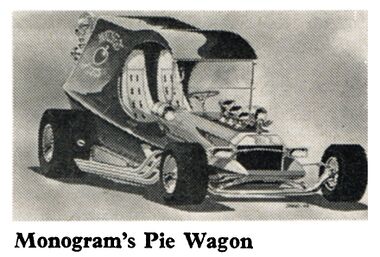 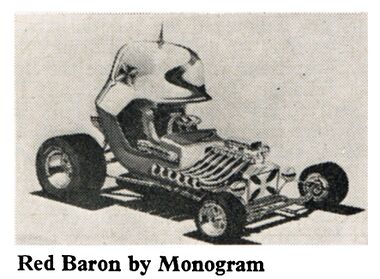 Monogram's 1960s- range of fantasy hotrod plastic model car kits were almost all designed by artist Tom Daniels. The kits were so popular that some of the cars were apparently then made up for real to be exhibited as "show cars".

In particular, the "Red Baron" kit is supposed to have been the second best-selling plastic model kit in the world (said by Daniels to only have been beaten in the rankings by an Airfix Spitfire kit).

The newest plastic kit in Monogram's series of "instant fun" car kits is another Tom Daniel way-out creation — the Paddy Wagon. The body is of old horse-drawn patrol wagon type, but when this is put on a chassis with a fully modified engine, big, fat drag slicks, cycle fenders and custom mag. wheels, it is instantly transformed into a flashy show car. The kit also has a custom "passenger" compartment with tufted upholstery and wood grained seats; plenty of chrome parts, some in authentic ornamental shapes; police station globe tail lights and combined custom and antique cab interior. Altogether a very pleasing model. The kit is packed in a big colourful box, and includes full painting and assembly instructions, plus a big selection of "kooky" transfers.

Another addition to Monogram's line of mad, mod fun cars is the Pie Wagon – yet another of Tom Daniel's way-out, custom-built designs.

This "Cherry Red" model sports many brass and chrome parts, which is enough to make any gourmet's mouth water. The rear door with psychedelic glass opens to give full access to the packed pie-tray. The wild interior contains a long, cherry-topped gear lever and old-time racing car fuel tank. Another amazing feature is the slight suspension on the rear wheels — very authentic.

Its engine is of the Custom Ford type, with custom exhaust system and "T" Brass radiator. The wide drag slicks on mag-spoke wheels add to the Wagon's authenticity. These we think could have been a little fatter at the back, and thinner at the front.

This, as with all Monogram models, fitted together easily and quickly. The finished article is very weird, yet very pleasing. Full assembly instructions are included and a choice of three different types of transfers can be made.