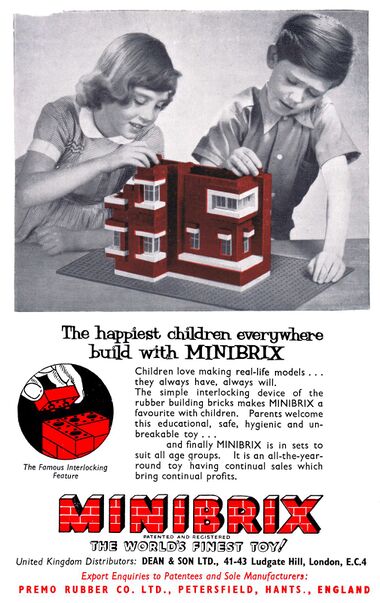 Minibrix (1935-1976), from the Premo Rubber Company, was an architectural building set system that represented an early attempt to make a new type of construction kit using new Twentieth-Century materials. The products were distributed for at least part of their life by Dean and Son Ltd of Ludgate Hill, London.

A "Minibrix" set provides unlimited interest to its owner with a remarkable range of realistic models that are firmly built yet easily dismantled. Being made of rubber "Minibrix" is both safe and noiseless, and, of course, practically indestructable.

There are sets at all prices, and accessories can be readily and cheaply purchased.

Minibrix is sometimes described as being "the first Lego", but the design requirements of the different material used (rubber) put Minibrix into a different category to Lego (or, more accurately, to the Kiddicraft system designed by Hilary Page that Lego "borrowed").

While both systems are washable, it was slightly disingenuous of Premo to describe their system as "hygienic", as the suggestion for what to do it temperature variations made the blocks difficult to fit together was to "wet" the plungers slightly, which would probably be done my most builders with the help of a judicious dab of saliva. So when playing with someone else's Minibrix set, one had to bear in mind that they were probably already coated with a thin layer of the previous owner's bodily fluids.

Faced with the competition from Airfix plastic building kits and Lego plastic building blocks, Minibrix was never going to be able to compete in the long term. Its main initial advantage was that it could be made using low-tech and not especially accurate equipment (with workers having to manually trim the flash off the corners of each block) whereas injection moulding, although it required an outlay on specialised equipment, could then churn out Lego blocks 24/7 with no further human processing required. Making rubber blocks made sense if one was already a rubber manufacturing company, but the higher-tech injection moulding approach, with bricks that were more stable, more rigid, more long-lasting, and which lent themselves to the rigid attachment of a wider range of accessories such as wheels and wings, were always going to ultimately win out.

Minibrix had a fun tactile element (and a distinctive smell and taste!) but until one added injection-moulded parts such as windows, it didn't have the architectural sophistication of a system like Bayko, and also didn't have the same general-purpose utility as Lego for making cars and planes and boats and spaceships.

The museum displays includes two built Minibrix buildings and a range of packaging and instruction manuals, in Arch Two.