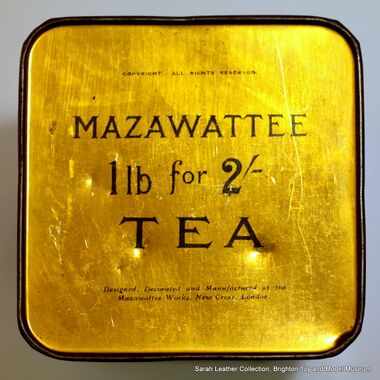 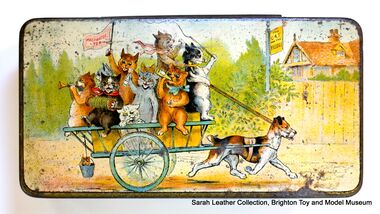 Mazawattee Tea was a tea company, especially known for its exciting advertising, that was famous throughout Britain during the Victorian era.

Formation and expansion to London

The Mazawattee tea company began in the early 1850s when chemist John Boon Densham started selling loose leaf teas from China and India in Plymouth. Tea was becoming a fashionable alternative to alcohol, promoted by the temperance movement and this, combined with lower taxes increasing the availability of tea to lower classes meant that Densham’s business soon found success. By 1865 the company, now known as Lees and Densham, was a prominent name in the tea business and in 1873 the company moved to London with another new name, now Densham and Sons. The Densham family owned one of the most important and advertised tea firms in England in the late 19th century.

John Boon Densham’s youngest son, John Lane Densham was responsible for the name Mazawattee. It was formed of a Hindu word ‘mazathe’, meaning luscious, and a Sinhala word, ‘wattee’ meaning garden and proved to be a triumph for John Lane. The name intrigued customers and John Lane’s enthusiasm for advertising made Mazawattee a famous name throughout the country, with attractive enamelled tins and advertisements on nearly every railway station platform. In 1896 Benjamin and John Lane Densham became managing directors when the business turned into a public company with John Lane soon becoming chairman. Mazawattee’s inventive advertising continued, with one stunt involving delivery vans being pulled by zebras.

With the decline of the tea industry in the early 1900s due to rising prices and higher duties, the Mazawattee Board of Directors began to expand into the chocolate and cocoa market. This was a decision John Lane Densham disagreed with and he resigned the next year, in 1902, with ill health. Mazawatte’s Tower Hill factory and offices, opened in the 1880s was devastated in a 1940 air raid and the firm, steadily declining throughout the 1950s, came to an end in the 1960s.