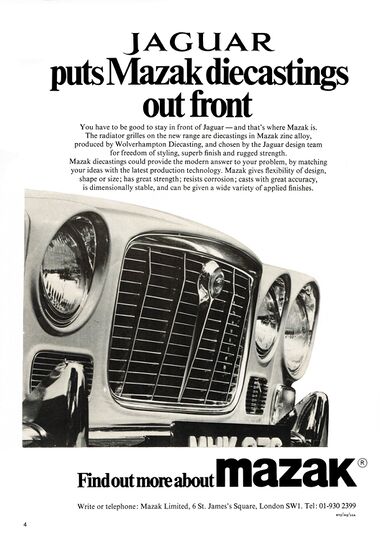 ZAMAK (also Zamak, Zamac) refers to a family of zinc-based alloys designed for casting. which started being perfected in 1929. Zamak is mostly Zinc (), typically around 4% Aluminium and also contains small quantities of Magnesium and Copper (sometimes the copper content is higher, depending on the formulation). Zamak is usually supplied to manufacturers in ingot form, and alloyed using Zinc supplied by the New Jersey Zinc Company, refluxed to 99.99% purity.

The Zamak formulations were designed to avoid the problems with Zinc pest that can otherwise plague zinc diecasting. Similar "homebrew" formulations used by small companies for casting had created an appalling reputation for these types of alloys, which were known dismissively as "pot metal" or "Crappite".

Zamak, created using ultra-purified source metals, supplied in ingots stamped with the maker's registered brandname, and with special attention given to the elimination of the main contaminants known to destroy castings, was the answer. All a company had to do was melt the ingots and start casting, in a "clean" environment. Unfortunately, many of their customers seemed to be unfamiliar with the idea of clean environments, or with the idea that that metal residues from previous melts counted as contamination that coudl ruin (or at least, badly compromise) the quality of the final product.

MAZAK (also Mazak, Mazac) is a UK-specific version of the formulation that was made using locally-produced 99.5%-pure zinc (since NJZC's 99.99% pure zinc wasn't locally available). Since the 99.99% purity of the zinc usd in ZAMAK was one of the product's selling-points, the "local" variation had to be given another name, and the British licencees in the early 1930s, Morris Ashby chose MAZAK as a variation on the name that was still recognisable. It probably also didn't hurt that the first two letters of MAZAK were the initials of "Morris Ashby".