From The Brighton Toy and Model Index
(Redirected from Category:Marklin)
Jump to:navigation, search 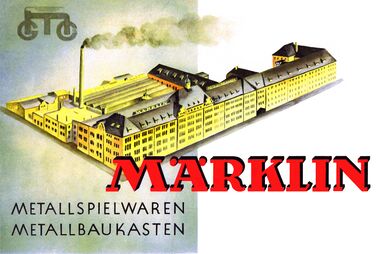 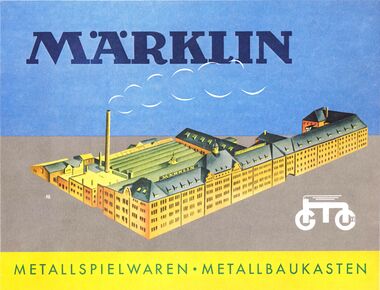 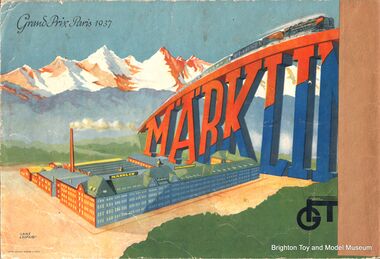 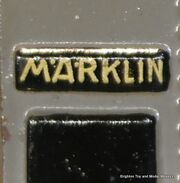 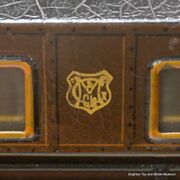 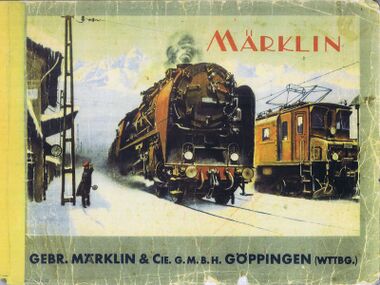 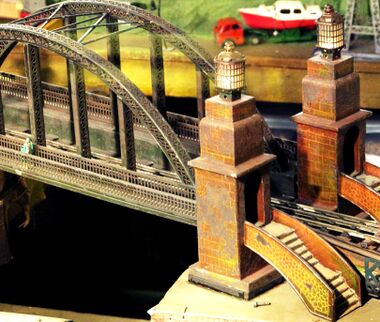 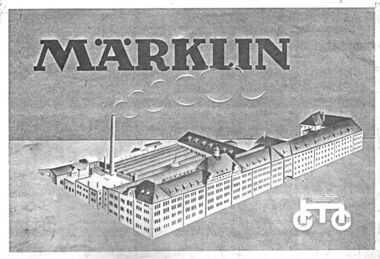 The Marklin factory, image from the 1932 catalogue [image info] 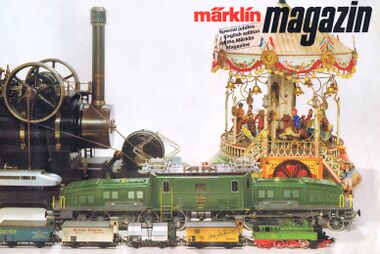 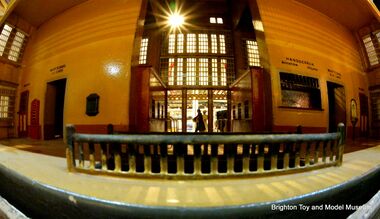 The Märklin ( or Maerklin ) toymaking business, started in 1859 in the toy and craftmaking region of Württemburg as W. Märklin by Theodor Märklin, is one of the great toymaker marques.

In 1888 the company became Gebrüder Märklin ("Märklin Brothers"), and the company absorbed the toymaker Lutz in 1891.

Märklin's toys are often recognisable through their solid build quality, the common use of stylised proportions in the earlier toys, and a certain stylistic imaginative exhuberance, coupled with engineering excellence.

Later creations put more emphasis on literal precision and correct proportions, but the more distinctively toylike products produced between ~1895 and ~1939 are sometimes referred to as belonging to the "Golden Age" of Märklin. 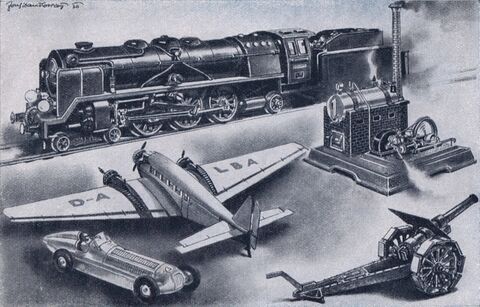 1936: Representation of some of the Märklin product ranges, catalogue artwork

Tinsmith Theodor Friedrich Wilhelm Märklin (1817 - 1866) opened his metalworking workshop in Göppingen in 1859, the same year that he married Caroline. Caroline had a sharp business mind, and became the travelling sales representative for the business, with Theodor working in the workshp while Caroline obtained new sales orders and built up the business, their main "niche" business being the manufacture of toy dollhouse kitchen equipment, an area in which Theodor's metalworkign skills and Caroline's sales expertise overlapped.

After Theodor died in 1866, Caroline remarried in 1868 and managed to keep the business going, although of Theodor's two sons, Eugen Märklin (1861 - 1947) and Charles Märklin initially seemed to show no interest in joining the company.

After Caroline's second husband died, Eugen started work at the company part-time, and in 1888 took over and restructured the business with the help of Karl, creating Gebr. Märklin (Märklin Brothers).

The new business no longer just made toy kitchens and stoves, but expanded to produce just about every small type of metal toys or associated item that one could think of, helped by the 1891 takeover of Lutz.

Ludwig Lutz (1820-1899) had founded a successful company making handcrafted painted tin toys, including clockwork cars and toy trains, and although Lutz had groomed his two sons and daughter to take part in and run the business, the company now needed an overhaul and investment in new machinery, and selling out to the new Gebr Märklin company seemed opportune. Märklin offered jobs to the existing Lutz workforce if they were prepared to move to Goppingen, acquiring a specialist workforce of toymaker-craftsmen, with a wide range of specialist skills. The resulting "rebooted" Gebruder Märklin could combine the Lutz workforce's creativity and finishing skills with more modern and efficient production techniques – toys could be made using machinery where possible, with the human element used where it had most effect, in the detailing.

The same year that they took over Lutz (1891), Märklin exhibited a model railway at the Leipzig Spring Fair consisting of a locomotive running on a figure-eight track with standardised parts that could be taken apart and reassembled in other ways, and the Märklin's following "Golden Age" is generally credited to have been a result of the cross-fertilisation of the two companies' combined best features.

By the early 1890s, the expanded Gebr. Märklin et Cie was being run by Eugen Märklin with a new partner, Emil Friz, and the company moved to a larger site, at Marktgasse 21, in 1895.

By the turn of the century, the new model railway range had become increasingly offered not just as a stand-alone system but as an expandable, collectable range, that ... as with dollhouses ... could be continually added to by the owner. Instead of being a toy that was just sold once, a model railway was never finished!

The possibilities of the Marktgasse premises were soon outstripped as the business kept growing, and the company raised additional investment and acquired Richard Safft as an additional partner, with the new money acquiring a larger premises at Stuttgarte Strasse,

Emil Fritz' ambition of creating the largest and most advanced toy factory in the world seemed to be realised in 1911 when the company redeveloped the Stuttgarte Strasse site and replaced the existing building with an imposing six-storey edifice. The new building appeared proudly on the backs of a number of Märklin catalogues, and even appeared as a commemorative constructional model, Märklin 72150.

The Marklin factory is still is use today, supplemented by the Goppingen Marklin-Museum at another location.

After continued expansion through the 1920s, the Märklin range was becoming bewilderingly vast, leading to the phasing out of support for gauge 2 and gauge 3. A few years after the necessary introduction of yet another gauge in 1935 (to counter the new sets made by Stefan Bing's new Trix company, the half-size 00/H0 and its further range of accessories also displaced gauge 1 from the catalogues, and the non-railway ranges started to contract with the restriction on the availability of raw materials. The catalogues didn't seem to be any smaller, but there was no longer much doubt that the company's focus was on model railways.

Marklin, in common with other metal toymakers around the world, took some time to recover from the Second World War, but Germany's economy and materials supply was obviously even harder hit than those in Allied countries. Ironically, this may have helped Märklin's long-term survival – the enforced post-war contraction of the business and tight focus on a more restricted and manageable product range aimed at the domestic market made the company more able to cope when the arrival of cheap plastic mass-production caused a crisis for the toy industry in the 1950s and 1960s. Other long-established mega-firms such as Meccano Ltd. and Lines Brothers ("Tri-ang") in the UK, who had hoped for an eventual post-war return to their earlier levels of business, and hadn't restructured, didn't survive.

Although Märklin went on in the 1890s to produce everything from enamelled toy fountains to scientific equipment, their main achievement during this decade is usually taken to be the introduction of the concept of standardised gauges for model railways. Where model trains had tended to be single items that were often floorbound (because the investment in making track to go with each model didn't seem worthwhile), Märklin recognised that if one was to build railway sets, it wasn't sensible to make new sets of track to go with each arbitrary-sized model train ... track had to be standardised, with subsequent trains designed to fit the existing track, rather than the track being designed to fit the trains.

The size of track in the sets introduced by Märklin in 1891 became Gauge I (Spur I), and was joined by a range of larger and progressively larger-numbered track gauges, gauge II and gauge III, followed in about 1900 by a smaller gauge, gauge 0. These standard gauges promoted interoperability between different companies' products, and reduced the risk both for buyers purchasing a model railway and for third-party companies supplying specialised accessories and components. For a small company whose expertise was track, or locomotives, or rolling stock, standardised gauges meant that they could sell into existing markets without having to invest in manufacturing entire model railway sets themselves, or having to depend on the business strategy of any one external company. The standardised gauging system created an ecology of companies around each gauge, reassuring buyers that their investment wasn't dependent on a single company or product line, and reassuring smaller companies that these were stable markets to sell into.

Märklin discontinued Gauge 2 in 1920, and the even larger gauge 3 in around ~1922, with subsequent 1920s catalogues typically only showing either the gauge 0 or gauge 1 version of a product, but proclaiming that practically every product was available in both sizes.

After the launch of Märklin's 00/H0 range in 1935, given pride of place at the very front of the 1935 catalogue, the writing was on the wall for the large gauge 1 product lineup, which didn't reappear in the 1938 catalogue and didn't seem to reappear until around ~1969.

What's in a name?

EVERYTHING! because everything in the world has a name – the best model railways that are made naturally have one, and are known as MARKLIN models. Wherever you see the name MARKLIN and the picture of the "Laughing Boy's Head," there you will be sure of getting the very finest quality models obtainable. Each is a facsimile of the real thing and has been carefully built to scale, and painted in correct colours, to create – not merely a strong, durable and efficient toy, but one that will be of scientific and educational interest to every one of us.

Great care and attention has been devoted to every detail in their construction, and each working part is conscientiously examined, and tested, before it is allowed to leave the Works – ( as in the manufacture of its counterpart in real life).

The lucky boy who possesses a Marklin Locomotive or Model Railway has a toy that will interest and instruct him for years.

The company museum will probably be the first point to contact for enquiries from the general public (other than the website).

The Brighton Toy and Model Index currently has over eleven hundred individual edited Märklin images, mostly from catalogues from 1906-1939.

Not all of the museum's public Märklin exhibits are yet listed on the Index, but we estimate that there are probably around 90-100 items arranged around the museum, comprising the most comprehensive permanent public collection in the UK, and one of the best in Europe and the World. There's a dedicated Märklin cabinet in Arch Three, locos, buildings and accessories in the Bassett-Lowke cabinet and on the central 1930s layout, a Marklin construction set and model in the metal construction sets cabinet, and a Märklin cooker and accessories in the Toy Kitchen cabinet.