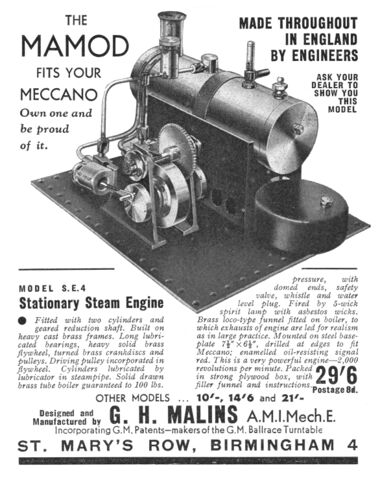 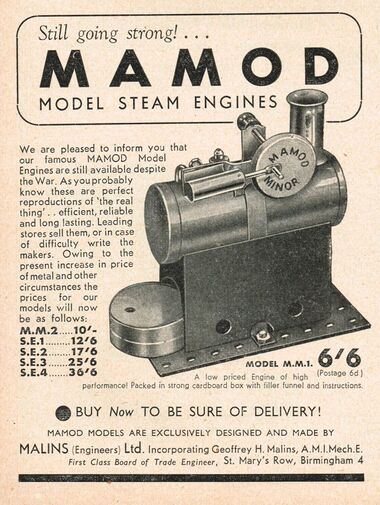 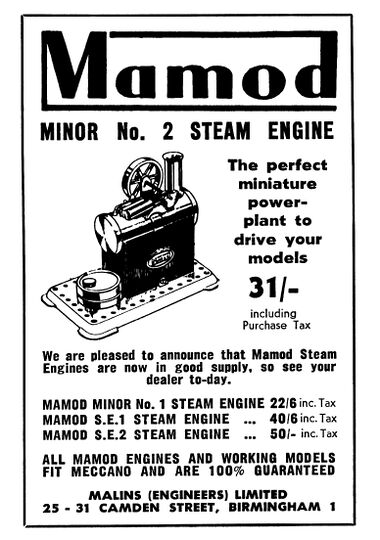 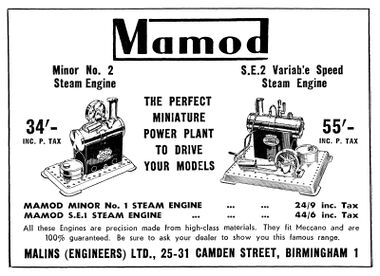 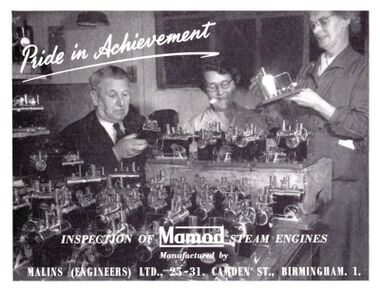 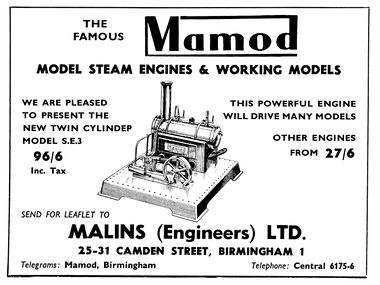 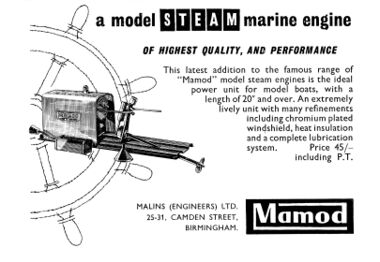 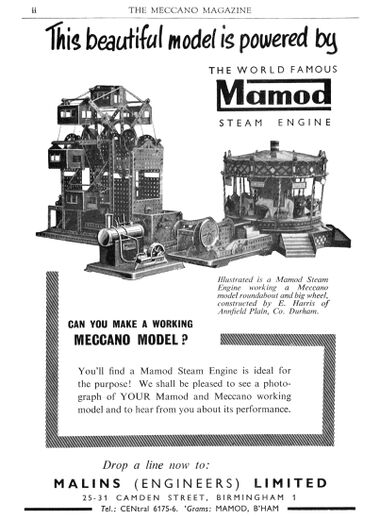 1960: "Can you make a working Meccano model? This beautiful model is powered by The world famous Mamod Steam Engine" [image info] 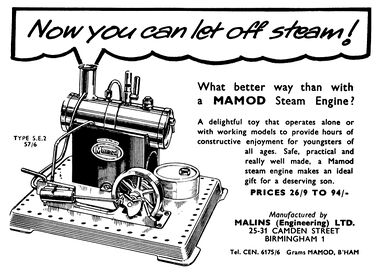 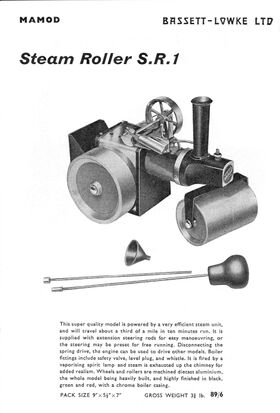 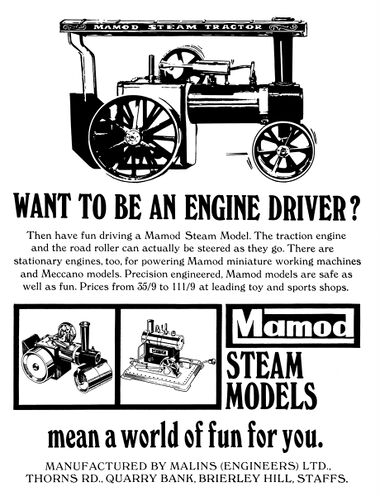 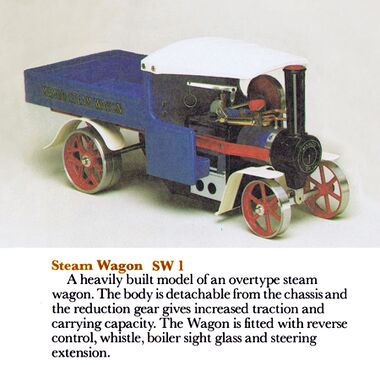 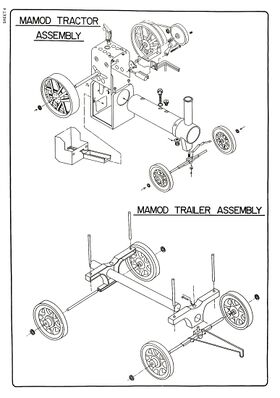 Mamod was launched by Geoffrey H. Malins in the mid-1930s to produce steam-powered stationary engines and mobile models, with the company name being a contraction of Malins Models.

The company is known for producing a small and unique range of distinct (and often very recognisable) steam-powered model vehicles. 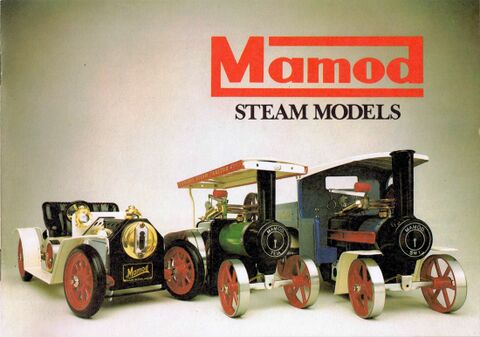 Between the end of World War One until around 1934/35, Hobbies Ltd. were selling steam engines made by Geoffrey Bowman, along with a range of Hobbies-Bowman boats. When the business failed to make as much money as Bowman had hoped, and he decided to branch out into other engineering interests, Hobbies needed another source of supply, and struck up an agreement with another engineer called Geoffrey, Geoffrey Malins, who was already supplying the company with brass propellors.

Malins had had a variety of engineering jobs, (like Bowman) enjoyed being self-employed, and had set up a workshop in his garden shed and started calling his business G.M. Patents Co.

After a meeting at the 1935 British Industries Fair, Malins started producing small engines for Hobbies broadly similar to their previous "Bowman"-produced range, producing the stationary steam engines SE.1, SE.2, SE.3 and SE.4, and a marine engine for fitting to boats, the ME.1. Where some of the Bowman range had been available in two versions, with a wood base or a metal base punched with holes at Meccano-compatible spacings, all of the new Malins stationary engines had Meccano-style bases. Understanding that there was also a significant market for selling the engines direct rather than just through Hobbies, Malins rebranded the range as Mamod, and renamed the company Malins (Engineering) Ltd. ... which was less catchy, but left the door open for other possible manufacturing projects.

After World War Two, Mamod revised their designs and then expanded the range to include a number of model steam-powered model road vehicles.

In the 1960s Meccano Ltd decided that they wanted to once again offer a stationary steam engine for powering Meccano models themselves, and contracted Mamod to make their new, unimaginatively-titled Meccano Steam Engine between 1965 and 1979. Mamod also started selling an updated solid-fuel-burning version, the SP 3.

Elsewhere in the construction, steel and die-castings are used to give maximum strength and realism. The baseplates have holes to suit construction sets by Meccano and other manufacturers.

TE.1 TRACTION ENGINE
"A precision unit powered by a very efficient steam unit. Fitted with speed regulator and towing eye. The canopy can be removed to allow tractor to be used as an open type unit. Extension steering rod supplied for easy manoevring."
SR.1 STEAM ROLLER
"This super quality model will travel approx a third of a mile in a ten minute run. Boiler fittings include safety valve and whistle. Fired by a vaporising spirit lamp. Steam exhausted up chimney for added realism. Supplied with extension steering rods."

ME.1 MARINE STEAM ENGINE
"A very lively power unit for boats of about 24 in. length. Simple installation, direct drive gives maximum efficiency with 15 minutes fast steaming to a filling." 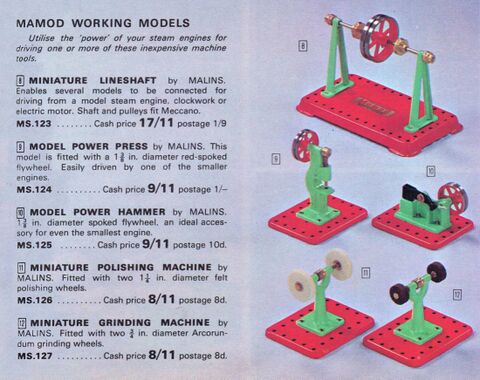 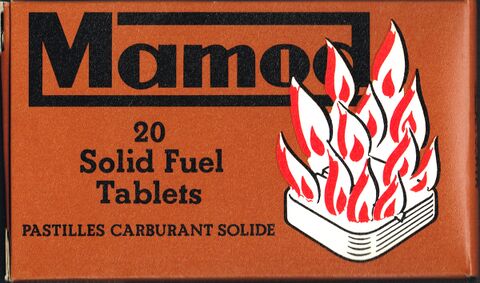 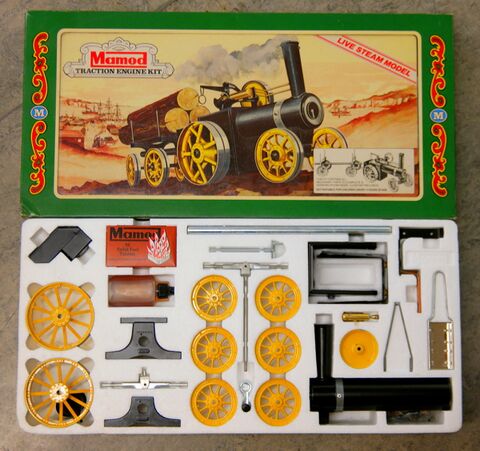