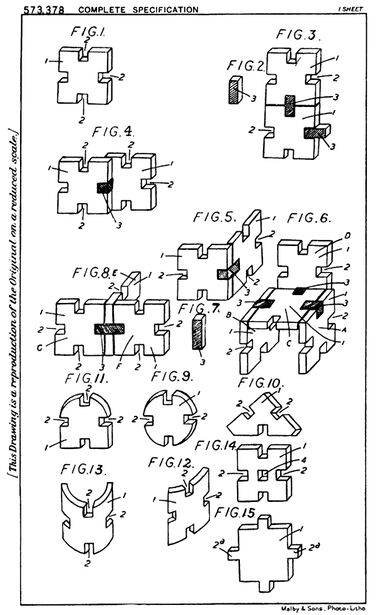 Makimor was a brand name used for push-together construction toy. The example we have is moulded plastic, but we think it might originally have been produced in wood.

The brand was owned by the Abbey Sports Co / Abbey-Corinthian Games Co, who also made a range of bats and other sports goods.

The basis of the Makimor system was patented by "... Jozsef Kuna, of 50, Station Road, N.W.10, of Hungarian Nationality ...", with Kuna applying in 1943 and being granted the patent in 1945. Kuna's patent suggests perhaps making the panels out of a soft wood and the interlinking rectangular pegs out of hardwood.

A number of other patents also show up in a search for the name, including an enclosed hand-held roulette-style game where one spun the wheel by pulling on a string, and, more notably, a couple of patents shared with a Christian Siegrist (Swiss national) for moulding plastic zip fasteners directly onto a cloth strip.

The earlier "zip" patent seems important: Zip fasteners had been around since the 1910s, and once the idea had matured, had involved metal teeth being clamped onto cloth strips. If Kuna was really able to co-patent a process of moulding plastic zips directly onto cloth, this sounds like a potentially industry-changing (and lucrative) patent.

Assuming that the zip patent (Jozsef Kuna, 5 Binsey Lane, Oxford, Hungarian nationality) refers to the same Jozsef Kuna, it would seem that after the intensive work on the zip-fastener patent, Jozsef may still have had ideas about how things interlocked swirling around his head, patented the toy idea, and sold or licensed it to Abbey Corinthian.