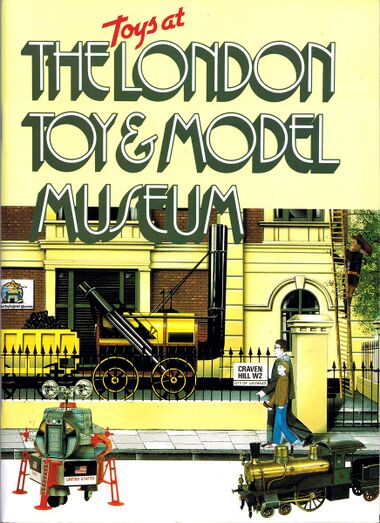 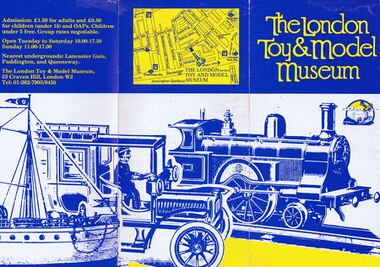 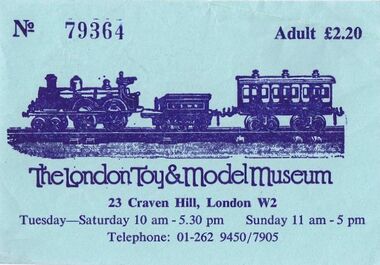 1983 promotional text, reused in the guidebook:

The serious collection and study of toys has gone on for many years and it would be true to say that in the main it has concentrated on pre-twentieth century toys, principally dolls, dolls houses and wooden and paper toys whose production did not primarily spring from the industrial revolution. The metal, factory produced and predominantly mechanical toy that arose in the mid-nineteenth century (coinciding with the birth of large factories capable of producing the piece parts necessary for these toys) has, surprisingly, been comparatively neglected until the last twenty-five years, and it was this type of toy that formed the basis of the LONDON TOY & MODEL MUSEUM.

The LONDON TOY & MODEL MUSEUM came into being through the interaction of three people, Allen Levy, Narisa Chakrabongse and David Pressland. The events leading to the formation of the museum had an interesting symmetry. Allen Levy was and is a long-time collector of toy and model trains and published the first major illustrated review of the subject 'A Century of Model Trains' in 1974. Real railways were actively mirrored through toys and models throughout their history and it was this historical rather than aesthetic approach that provided the spur to both his collection and book.

David Pressland's approach was entirely aesthetic and to this end he chose the Victorian and Edwardian eras as his subject. Over some fifteen years he has assembled one of the great international collections of toys of this period with a particular emphasis on German-made items. (Germany was predominant in the world of toy-making until the Second World War.) David Pressland wrote, and Allen Levy's company New Cavendish Books, published what has become accepted as the classic work on the history of these toys entitled 'The Art of the Tin Toy', in 1976.

The ring was closed by Narisa Chakrabongse, whose father, Prince Chula, and uncle, Prince Bira, shared a great interest in toys and models and were regular customers of Bassett Lowke Limited. A rare Märklin aeroplane which miraculously survived in a cupboard in a damp cellar in Bangkok for over 65 years, now forms part of David Pressland's collection. Narisa Chakrabongse also inherited the ERA racing car, Romulus, raced by her famous uncle Prince Bira and, between races, it is housed at the Museum along with its memorabilia.

Narisa Chakrabongse is also a keen collector of bears in all their forms and, as befits a museum situated in Paddington, they form a significant part of the collection.

The museum occupied several floors of a residential building, which then required extensive refit work to make it compatible with accessibility and fire regulations.

The museum was sold to Fujita Corporation in 1989 for four million pounds, who invested a further 5.5 million in the refit (which commenced in 1994), but enthusiastic toy collector Kazuaki Fujita died in 1995, and the museum found it difficult to survive as a going concern and pay back the investment that had been required for its refit.

Eventually the collection was broken up and sold, with many of the pieces going to Japan, and the building turned into residential flats.