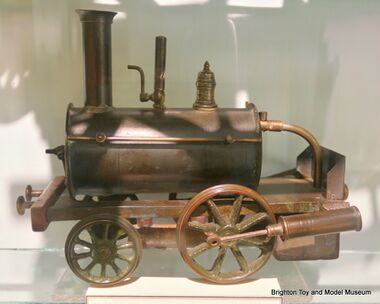 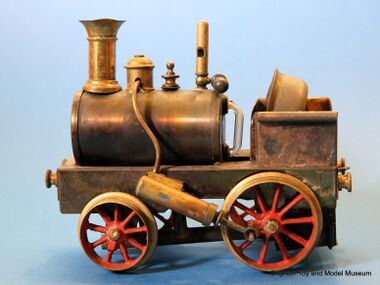 Produced from around the mid-Nineteenth Century onwards, the steam-powered usually-four-wheeled "Dribblers" (a.k.a. Birmingham Dribblers, a.k.a. Piddlers) were some of the very first commercial toy locomotives.

Typically fired by alcohol (methylated spirits was available in the mid-18th), and running on the floor without track (standardised track didn't appear until the 1890s), they tended to dribble a trail of water behind them, giving rise to the nickname.

Dribblers were stand-alone locomotives, usually without a tender or rolling stock - they were already sufficiently dangerous as stand-alone floor toys, as the the lack of track meant that they had no remote control or steering, and a "runaway" dribbler, with fuel and a naked flame, hitting a wall at an angle and tipping over out of reach of the owner, would be a good way to start a house fire. Adding additional wagons of carriages behind the loco would make it even more unstable and prone to falling over onto its side.

One can imagine using a dribbler outside, but the wheels would tend to require a very flat surface, and a slightly bumpy lawn probably wouldn't suffice. Some later dribblers had deliberately angled wheels so that an "escaped" engine would veer to one side and hopefully stop when it hit an obstacle (rather than continuing happily along a straight road until its fuel ran out), and in theory, this would allow a dribbler to run in a circle without any further attention ... but in practice the turning circle was so large that you'd probably need a very large room to do this.

One of the disadvantages of early dribbler designs was that if one lit the burner and started generating steam without allowing the loco to move, the pressure would continue building up until the boiler exploded, potentially showering the owner with shrapnel and superheated steam. Designers of later models tended to include a safety pressure-release valve, and (while they were at it), also steam whistles.

Identifying the manufacturer of a dribbler is often extremely difficult. Many of them were produced by small British engineering companies or by their German counterparts as a sideline to their main business, and while some might have appeared in distributors' catalogues, a lot of small-scale "mechanical" British metal toy manufacturing disappeared in the late Nineteenth century with the industrialisation and expansion of the German toy giants Märklin and Bing.

As well as the relative lack of printed retail documentation and makers marks, the tendency of small engineering firms to manufacture anonymously for companies who could sell to the public, and the lack of documentation about the actual makers, identification is also complicated by the copying of designs between manufacturers, and the possibility that a retailer switching to a new supplier might ask the new company to make the new products look as close as possible to the older ones.

A further complication when identifying dribblers is that the simple construction and distinctive toyish shape encouraged companies to continue producing "new" dribblers to old designs long after the original natural lifespan of the product was over, for sale to vintage steam enthusiasts. The basic design was also attractive to home model engineering enthusiasts, since the simplicity of the shape made it comparatively easy to make a decent working copy, as a beginner's project. A wave of renewed interest in vintage vehicles (illustrated by the popularity of the Matchbox "Models of Yesteryear" series) also resulted in a brief flurry of "new" reproduction dribbers on the market in the 1970s, further confusing things.