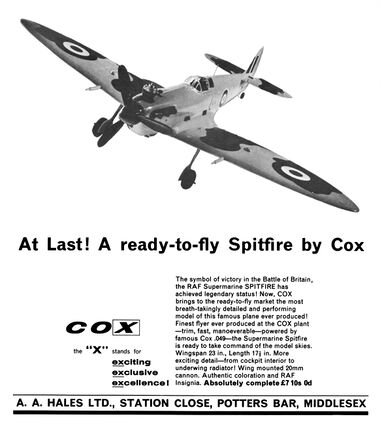 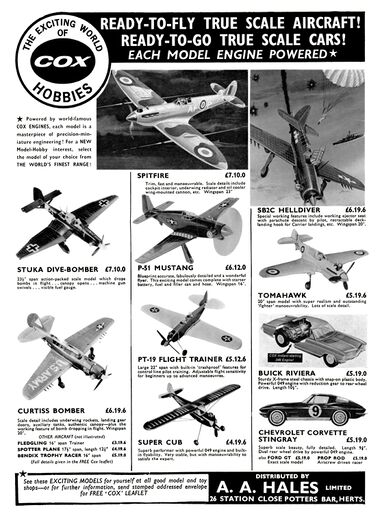 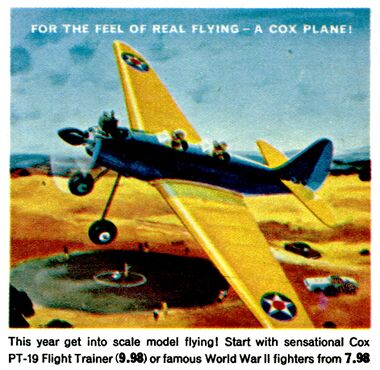 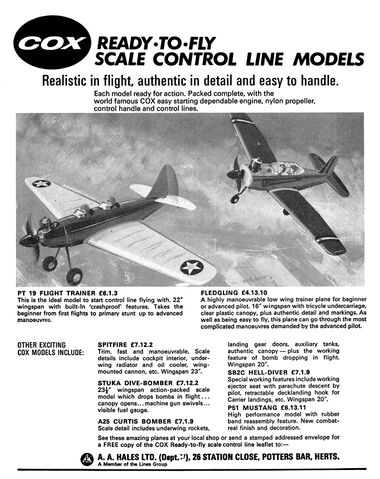 After Cox had made a success of selling internal combustion engines for tethered model cars (and the cars themselves), it probably seemed logical to branch out into selling tethered model aircraft.

Control-line model aircraft may seem like an unfamiliar concept nowadays, now that radio control is commonplace and cheap, but in the early days of mid-sized "engined" model aircraft, where the owner already had to pay out for the model and the engine, the additional cost, weight and bulk of radio control equipment and batteries wasn't so attractive ... and if something went wrong, you were liable to lose your precious model.

A tethered model, controlled via a control line could only really be flown around in circles, but that was enough for the owner to be able to watch their craft flying at a constant distance. Control-line flying also gave a sense of being connected to the craft and feeling its responses, a little like flying a kite. If there was a crosswind, one would have to release some line or step forward when the plane was at one point on the circuit, and pull in some slack or step back when it was at the other side. There was a certain skill and technique to flying safely, and as one graduated to larger and heavier planes, with more detailing that made the aerodynamics more challenging, the skill level needed to avoid crashing the plane became higher. Newcomers were advised to start with a small, stable, simple, "easy" plane until they became proficient, after which they could consider moving up to something more ambitious, that might have extra features like a bomb drop mechanism or an ejecting pilot with parachute.

Realistic in flight, authentic in detail and easy to handle.

PT 19 FLIGHT TRAINER £6.1.3
This is the ideal model to start control line flying with. 22" wingspan with built-in 'crashproof' features. Takes the beginner from first flights to primary stunt up to advanced manoeuvres.
FLEDGLING £4.13.10
A highly manoeuvrable low wing trainer plane for beginner or advanced pilot. 16" wingspan with tricycle undercarriage, clear plastic canopy, plus authentic detail and markings. As well as being easy to fly, this plane can go through the most complicated manoeuvres demanded by the advanced pilot.