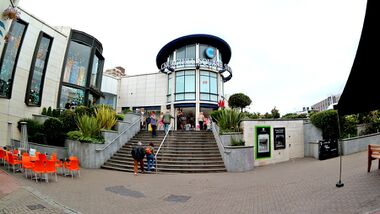 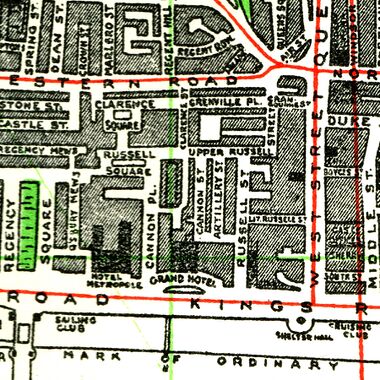 1939: Map of the area before redevelopment [image info]

The Churchill Square Shopping Centre is located on the south side of Western Road, within sight of the Clock Tower.

The current incarnation of Churchill Square was built in the late 1990s. An earlier open-air version was built in the 1960s and was accompanied by some very 1960s-looking tower blocks, which don't seem to have been missed when they went.

The shopping centre was created on previously developed land on the South side of Western Road, extending south to the rear of the Grand Hotel, and between Cannon Place on the West and Russell Street on the East.

Descriptions of this first incarnation of the shopping centre tend to fixate on how bleak and windswept it felt (and how unpopular it was towards the end), but it does seem to have had some interesting sculptures.

Most of the shops are very conventional high-street chainstores (e.g. Debenhams) but the Cntre also has an Apple Store and a Lego Store (lower level, by the stairs and lifts). Further back from the Lego store is a general toystore, The Entertainer.

The Centre's two-storey W H Smith stationers houses a Post Office and Bureau de Change. This is Brighton's main Post Office for sending parcels and can get quite busy.

The Centre used to include a two-storey Borders bookshop with a nice cafe upstairs, and a rather cool Habitat store, before both national chains unfortunately got into financial difficulties and closed their stores.