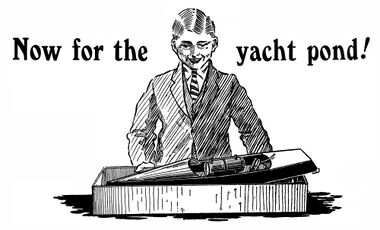 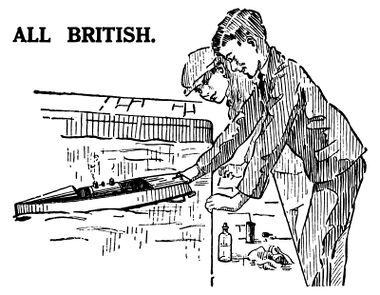 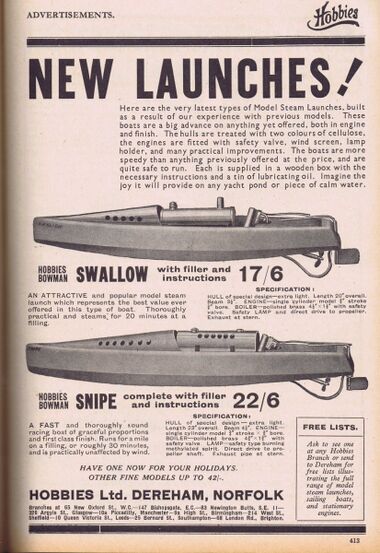 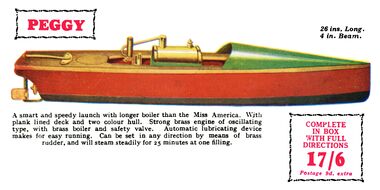 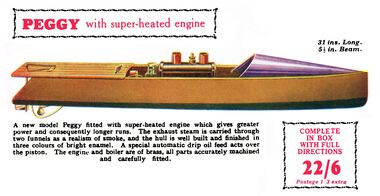 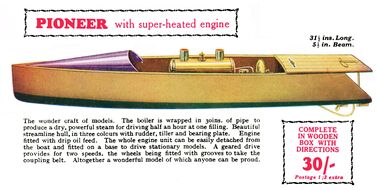 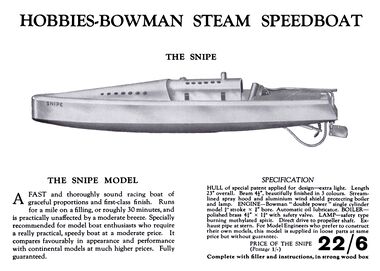 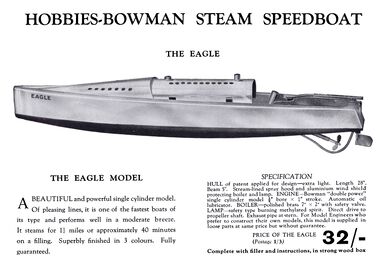 Bowman Models promoted their steam-powered boats based on the sheer amount of power provided by a steam engine. While a lightweight rubber-band-powered boat could be tweaked to whizz off across a pond at high speed and then stop, or to tootle along at a more leisurely pace for longer, steam power allowed a boat to move quickly, and continue moving quickly for twenty minutes until the fuel or water ran out, which gave an obvious advantage for longer-distance races. 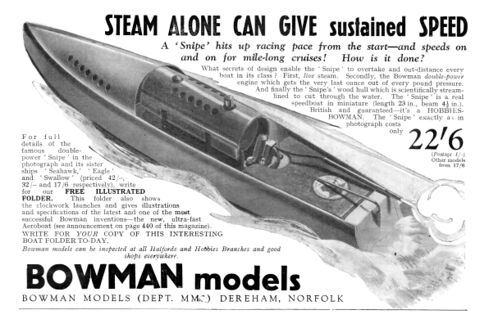 Steam boats were rather satisfying, and authentic in a way that rubber- and clock-work powered boats weren't. Disadvantages were weight, cost, and the fiddly process of refuelling and lighting (and maintenance).

The run of Hobbies magazines in our library has a large gap before 1929, but in 1929 the advertised range of live steam boats consisted of Peggy, Miss America and Pioneer. An ad in an April 1929 issue contains a testimonial from a happy customer who had allegedly owned a "Peggy" for nearly three years ... if true, this seems to suggest that Peggy goes back maybe as far as 1926/1927.

Once the range had matured in the early 1930s, the Snipe and smaller Swallow seemed to be given pride of place in advertising, suggesting that they may have been the biggest sellers. The Seahawk was the new top-of-the range model with two cylinders rather than one, a doubled running time (and a doubled price!), and the "Eagle" seems to have been its cut-down sibling (still with the higher-capacity tank and doubled running time at forty minutes rather than twenty, but with a single-cylinder engine). Most of the boats were priced at under 20/, the "Seahawk" cost over double this at 42/-, and the intermediate "Eagle" was priced roughly mid-way between the two, at 32/-

In the 1920s, Hobbies also sold a steam tug and a steam "Peter Pan" boat. "Peter Pan" was powered by the small "Peter Pan" steam engine produced by Geoffrey Bowman under his earlier company name, The Woodcraft Patents Company. We don't know much about the steam tug, but we'd be surprising if it wasn't also Bowman-powered.

Although Bowman weren't the only UK company producing steam-powered boats (Bassett-Lowke Ltd. had a range, and pretty much all manufacturers of stationary engines offered "marine" engines that could be fitted to boats), the Bowman range were optimised for functionality and performance rather than to look "pretty".

Trying to compile specifications for the different boats can be a little frustrating. While some disagreements between different adverts might be due to a decision to quote length either as deck length or as total length including rudder, some boats do seem to have genuinely changed specification. Comparing a 1930 picture of the "original" Peggy with a 1933 Hobbies Annual image of the later, larger "superheated" Peggy shows that they are very different boats, the 1933 Peggy appearing to be a slightly modified version of the 1930 superheated "Pioneer", with an almost completely different stern.

Pictures of the Seahawk also seem to show two different types of superstructure.

Bowman's steam boats originally appeared in the Hobbies literature referred to as being by "Hobbies", but the naming then became Hobbies-Bowman, both in the advertising and in Bowman Models' own catalogues. Later Bowman advertising dropped the mention of Hobbies.

We have one of the Bowman steam boats on display, the Snipe.