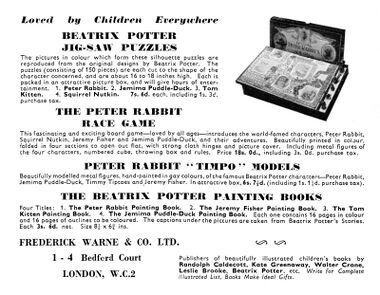 Beatrix Potter (1866 – 1943) created a successful series of illustrated children's books based on lifelike illustrations of animals (albeit with human clothing and behaviour).

Potter initially got turned down so many times by publishers that she decided publish her first book, The Tales of Peter Rabbit, herself. After successful self-publication it probably became easier to get the attention of publishers, leading to publication by Frederick Warne.

Potter had had an isolated childhood that led her to owning a number of pet animals, and the time she spent with Frederick Warne led to a romance and plans for marriage that were cut short by Warne's death.