The shape of the vehicle is basically "a strongly armoured box with a big nose" – as a command vehicle, it's basically a six-wheel-drive armoured room for critical command personnel, designed for survivability rather than speed, manouvreability or armament, with the "tapered nose" designed to deflect oncoming fire as much as possible. 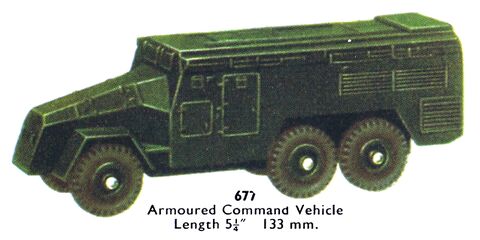 This realistic miniature represents the type of vehicle used by Army Commanders as a radio-equipped mobile headquarter unit. The original is an A.E.C. production with drive on all wheels and bullet-proof body. The model measures 5 1/4 in in length. It is finished in service green and carries the "Desert Rat" marking of the famous 7th Armoured Division.

One of the most famous campaigns of the second World War was fought largely on the sandy deserts of Libya ...

... The new model is Dinky Toys No. 677, and it is based on an A.E.C. six-wheel drive vehicle of unusual and striking design. I have included two pictures of the Armoured Command Vehiclein these pages. One of them shows the new Dinky Toy in realistic surroundings, and the other is a close up of the model, showing the vast amount of detail included in the body casting.

As you can see from the angular lines and the solid appearance of the model, the design of the vehicle is strictly functional and well suited for use under the arduous conditions of desert warfare. Of course the six-wheel drive arrangement is a feature of the utmost importance in a vehicle designed to operate over rough ground and on loose sand.

An Armoured Command Vehicle is a mobile headquarters, and it contains all the necessary equipment and fittings to enable the headquarters staff to keep in touch with the units under their control. In the vehicle on which the Dinky Toy is based, provision was made for erecting side tents to extend the accomodation, and the necessary fittings for these, and many other details are marked on the model. The Dinky Toy gives too a striking idea of the strength and rugged characteristics of the real vehicle, and it makes an impressive addition to the Army Services.

A point of special interest in the finish of the model is the sign applied to it. Teh sign represents a jerboa, or desert rat, on a black rectangle, and it is the badge of the 7th Armoured Division. This formation was the first to go into action in the Western Desert in 1940, and its harrying tactics in action so resembled the currying and biting movements of the jerboa, that the desert rat symbol was adopted as the badge of the 7th Armoured Division and earned the familiar and proud title of "Desert Rats". Teh sign is applied at the front and rear of the Armoured Command Vehicle, and its inclusion adds an authentic and unusual touch of detail to the model.