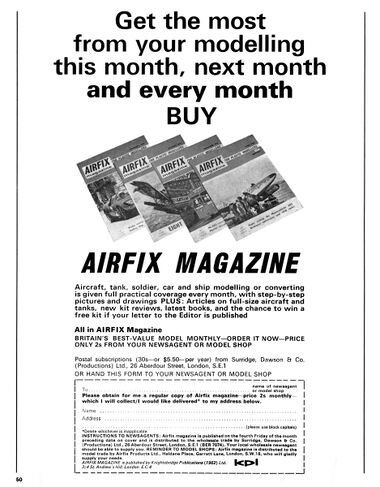 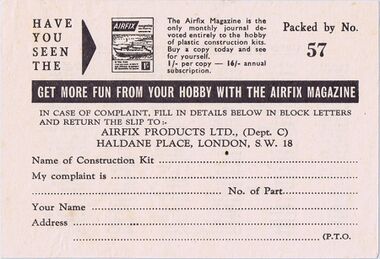 "The Airfix Magazine is the only monthly journal devoted entirely to the hobby of plastic construction kits. Buy a copy today and see for yourself. GET MORE FUN FROM YOUR HOBBY WITH THE AIRFIX MAGAZINE " [image info]

The first issue of Airfix Magazine appeared in June 1960 with the tagline "magazine for plastic modellers". Aimed generically at plastic model enthusiasts, and happy to review other companies plastic kits, the magazine was intended as a general-purpose (plastic) modelling resource that was not too obviously a way to promote their own products. If Airfix could encourage people to commit further to plastic modelling, then many of the kits they bought would be Airfix.

The magazine produced series of articles aimed at enthusiasts of specific genres: For people who modelled soldiers there were articles on obscure details of particular types of uniform, for model aeroplane enthusiasts there were details of difference between different versions of a particular aeroplane, and so on. The current incarnation of the magazine (as of 2018) is "Airfix MODELWORLD" magazine

Get the most from your modelling this month, next month and every month BUY AIRFIX MAGAZINE

Aircraft, tank, soldier, car and ship modelling or converting is given full practical coverage every month, with step-by-step pictures and drawings PLUS: Articles on full-size aircraft and tanks, new new kit reviews, latest books, and a chance to win a free kit if your letter to the Editor is published.

All in AIRFIX Magazine