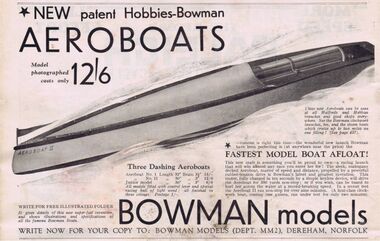 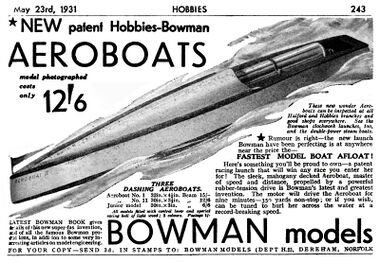 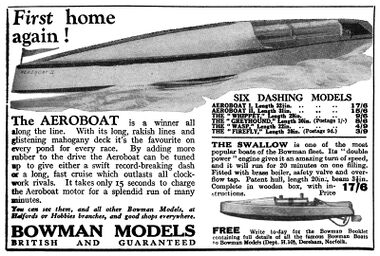 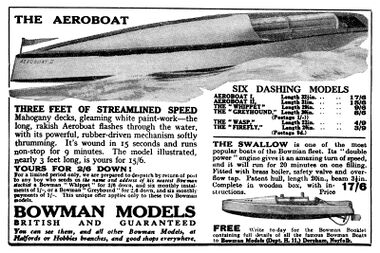 The Bowman Models range of Aeroboats seems to have appeared some time around 1930/31.

The range is a little confusing to newcomers as "aero" suggests that the boats might have been powered by compressed air, pictures show what looks like a silver cylinder visible within the boat body, reminiscent of the lightweight compressed-air cylinders that had already been been used for model aircraft by this time, and because the advertising for the boats was occasionally a little shy about saying how they were actually powered ...

... but in fact, the Aeroboat range was driven by a large rubber band, and the curved metal cover was presumably a protective measure to prevent the owner being slapped in the face by high-velocity rubber if they enthusiastically over-wound the boat, or if the rubber had partially perished.

At the moment we don't actually know where the term "aero" comes from ... we're guessing that it might be a reference to the fact that many model aircraft were also powered by wound rubber bands.

While the idea of a twisted rubber band was not particularly high-tech, Bowman's "twist" on the idea was to design a rapid-winding mechanism that was claimed to allow a boat to run for minutes after only nine seconds of (very skilled!) winding (later descriptions suggested fifteen seconds).

At the end of the central shaft was a deep knurled pulley with curved ridged sides. The owner took a loop of string or cord, wrapped it tightly around this pulley, twice, and then pulled hard on one side of the the cord to wind up the rubber band. Doing this around twelve times resulted in the band being twisted by ~300 turns, which represented a full winding.

This new craft is something you'll be proud to own – a racing launch that will win almost any race you enter her for! The sleek, mahogany decked Aeroboat, master of speed and distance, propelled by a powerful rubber-tension drive is Bowman's latest and greatest invention. This motor, fully charged in ten seconds by a simple keyless device, will drive the Aeroboat for 350 yards non-stop; or, if you wish, can be tuned to hurl her across the water at a record-breaking speed. In a recent test the Aeroboat II ran non-stop for over nine minutes (A first-class clockwork boat, costing one guinea, ran under test for only two minutes).